Trump admits defeat, is this a deepfake?

In the United States, on January 7, 2021, Donald Trump finally accepted Joe Biden’s victory in the November 2020 presidential election. In a video posted on his YouTube account and various social networks, in which the 45th president appears strangely static behind his official desk, Trump leaves reluctantly the place to Biden and Harris. But if he gave up, his supporters still believe it was a manipulation, a deepfake.

On January 7, 2021, Donald Trump published a video in which he conceded victory in the U.S. presidential election to Joe Biden. This video was immediately criticized by Trump’s supporters. Many on Twitter, on Parler (the far-right American social network), or on 4chan (a discussion forum popular among members of Qanon, a network of conspiracy theorists) raised the idea that this video was in fact a deepfake. However, the video was authentic and has been posted on Trump’s YouTube account. 1 Full video below —Message from President Trump, 4,299,925 views • Jan 7, 2021.

On January 8, Trump supporters still couldn’t accept the concession speech was a genuine one and were quick to denounce a gross manipulation carried out to destabilize America. Image analysis, slow motion, comparisons, there was talk of doubts, rough editing, strange artifacts… 2 Fact check: Donald Trump concession video not a ‘confirmed deepfake’ 8 january 2021 to prove the conspiracy. The network Parler 3Parler is an American microblogging social network launched in August 2018. It is initially funded by American billionaire Robert Mercer and his daughter Rebekah and is home to the American extreme right as some Twitter accounts of Qanon members relayed allegations of manipulation, thus participating in the rise of anger that led a few days later to the invasion of Capitol Hill in Washington. 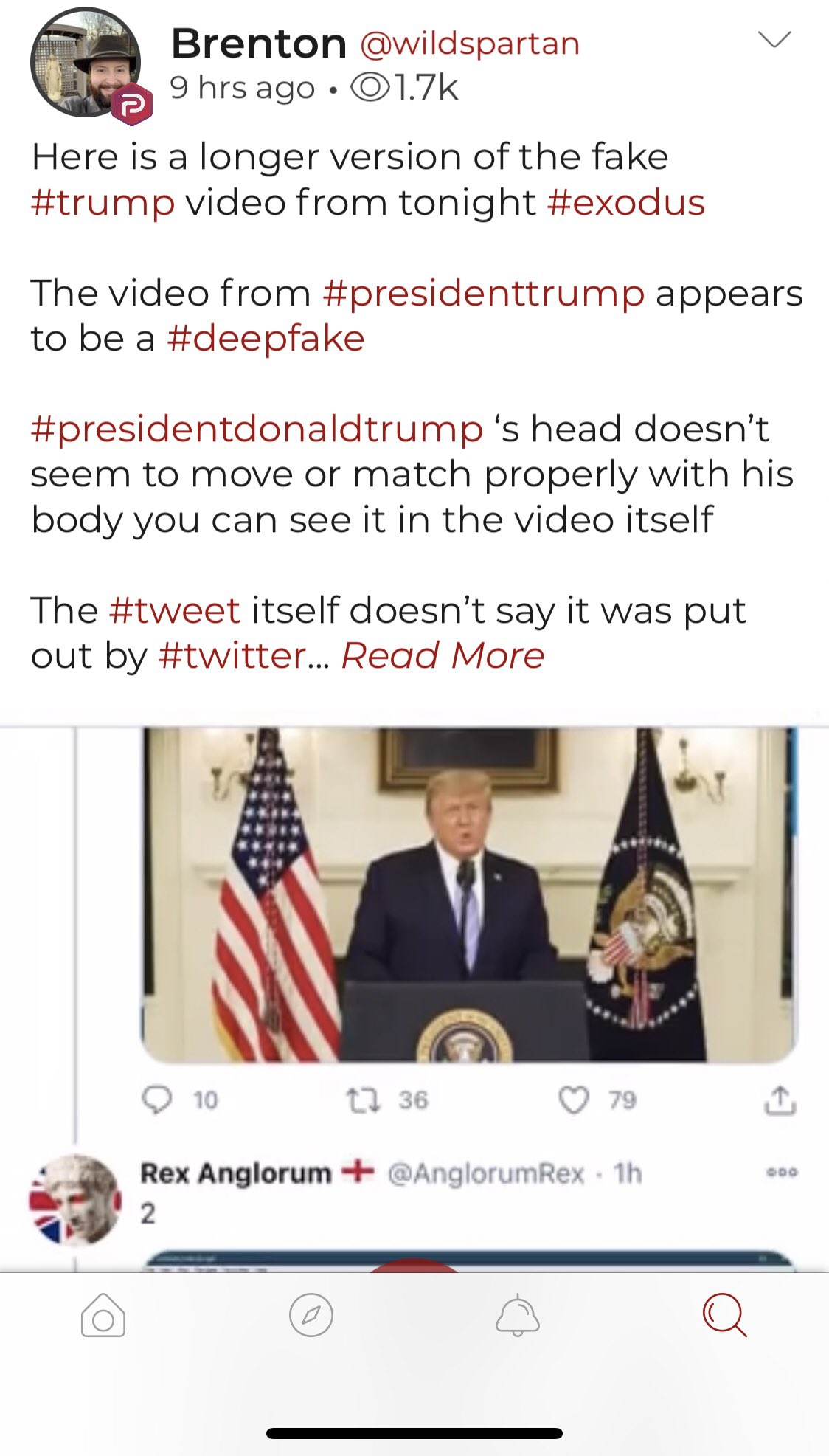 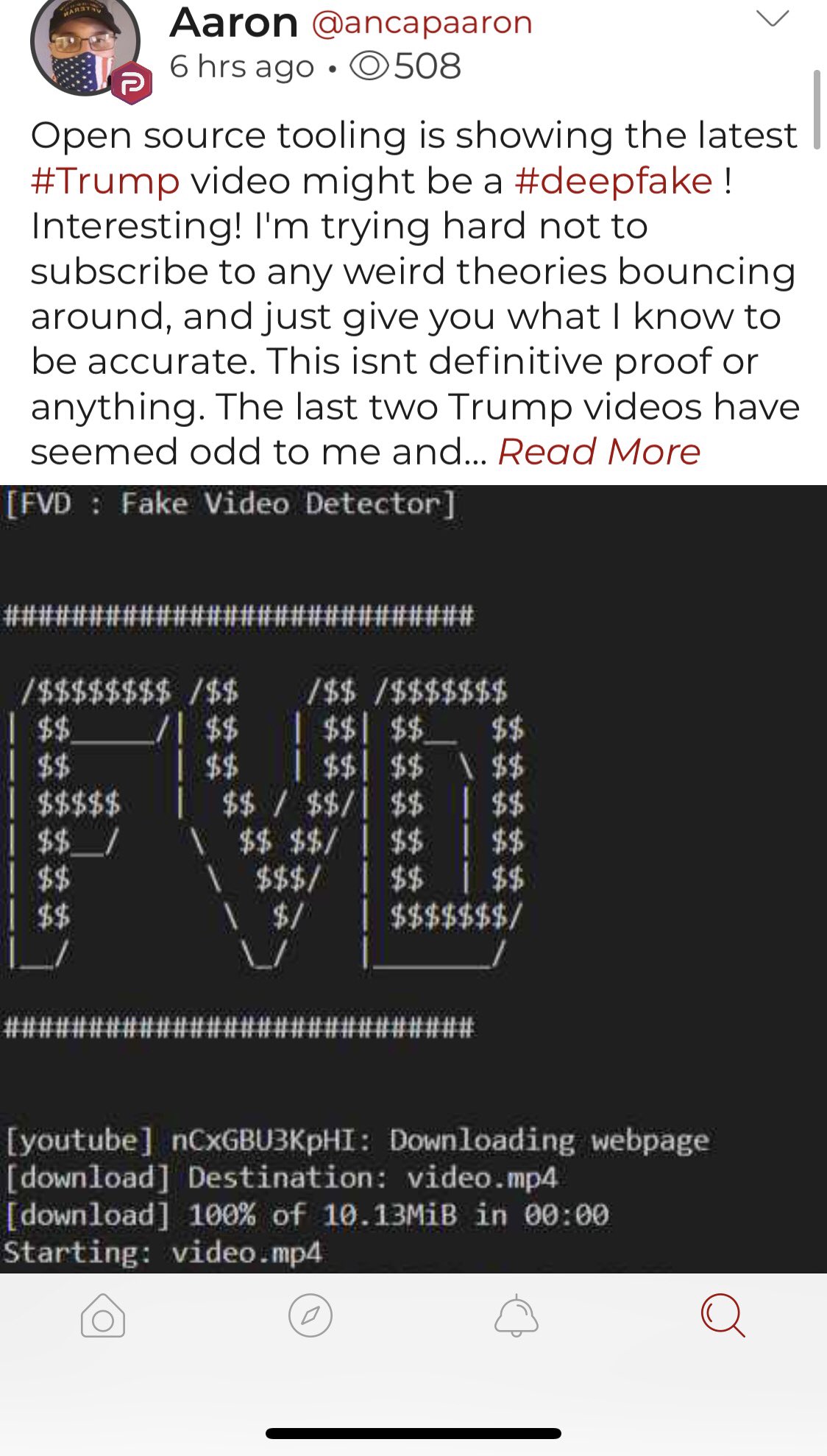 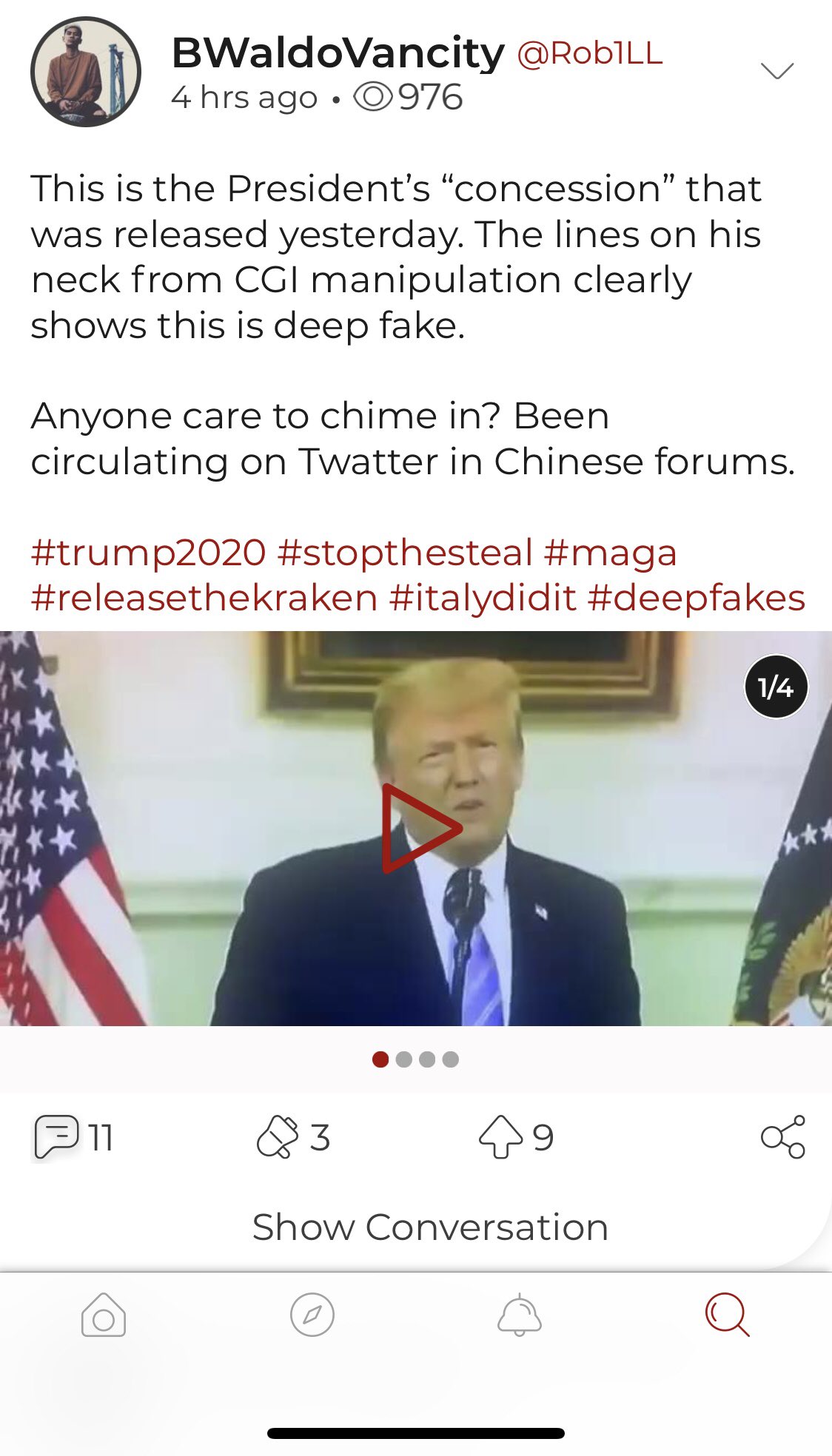 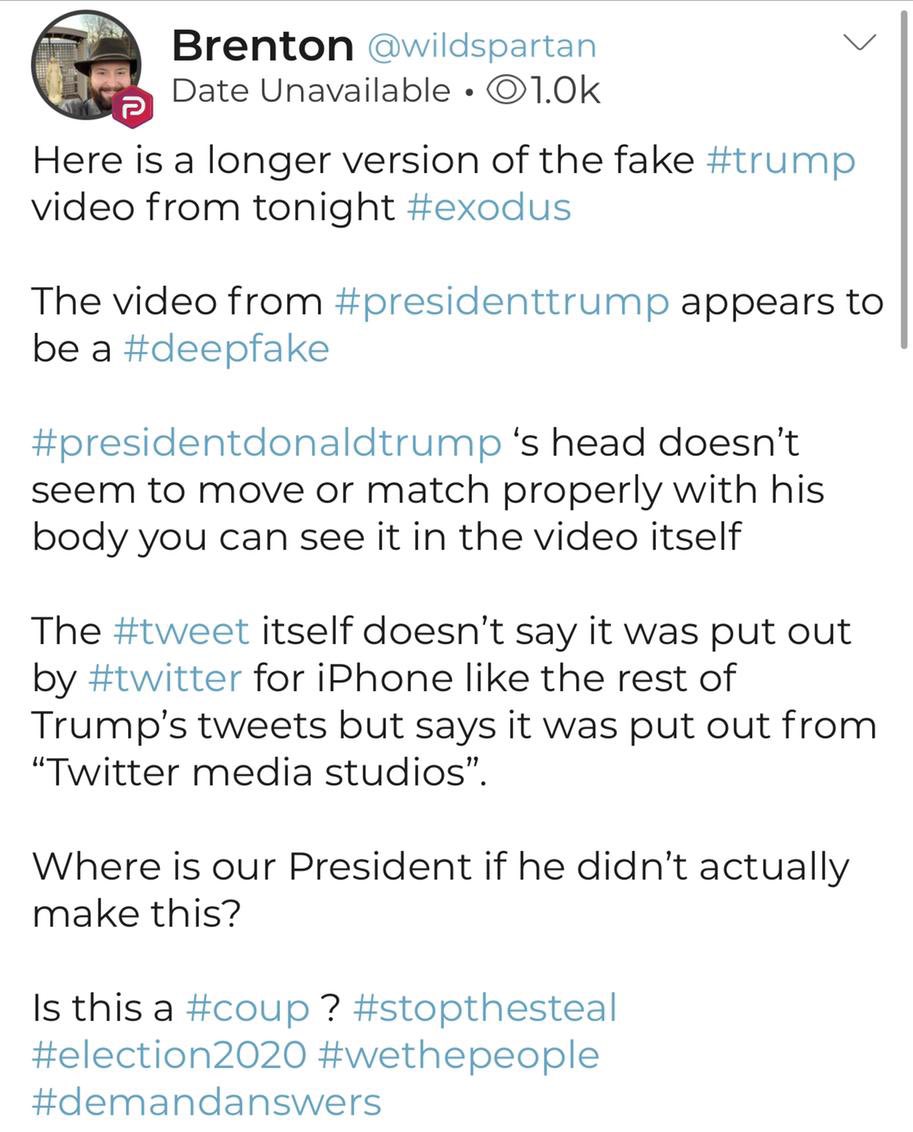 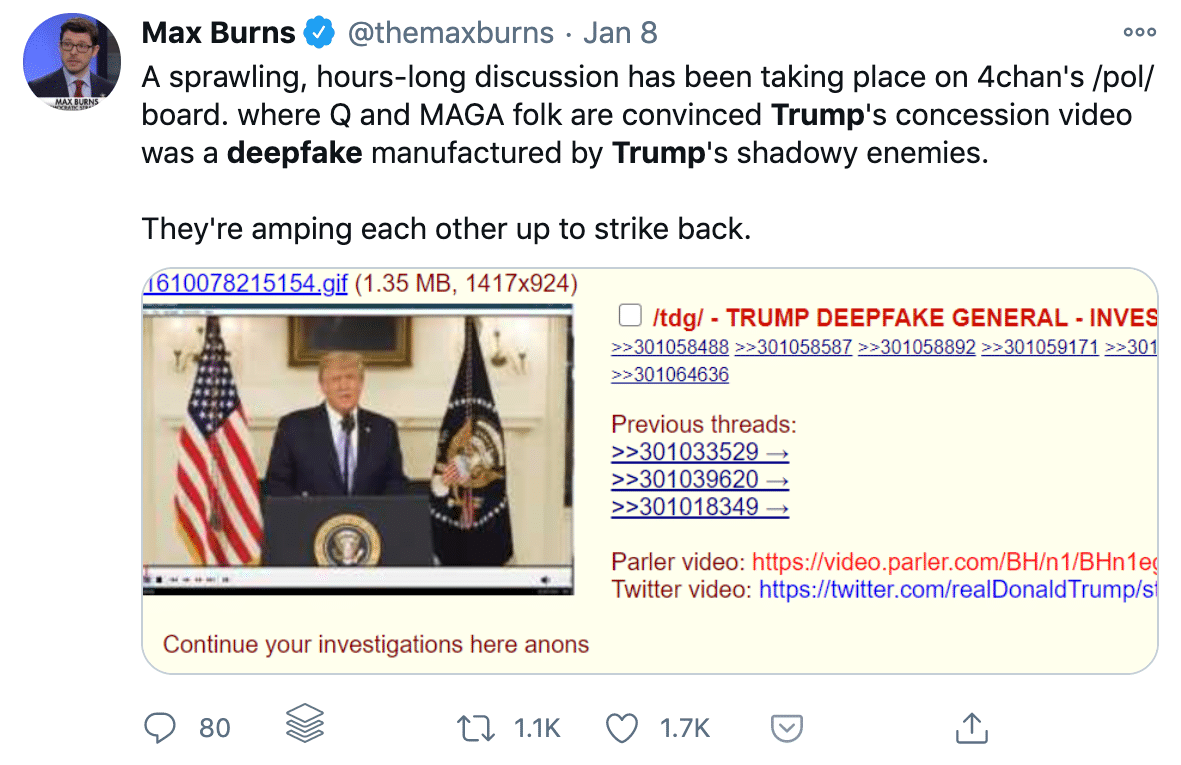 Steps by steps, we see how the deepfakes are insinuating themselves into the collective narrative and changing the way we read certain images or video documents, digging deeper into a furrow already largely opened by the arrival of Photoshop in 1990.

Here in particular, behind the rather easy argument that validates the craziest plots, there is a wholly imaginary that is structured around synthetic media by mobilizing the codes of dystopian science fiction. The lexical field that surrounds them feeds these fantasies. For the extremists of Trumpism, deepfake’s “deep” is immediately reminiscent of the deep state, a popular notion in conspiratorial circles of a secret government manipulating the world for obscure reasons. Deepfakes hide, camouflage, burry under layers of algorithmic manipulation supposedly elusive truths. Moreover, algorithms, facewaps 4 swapping the faces of characters present in a video using algorithmic manipulation. This is the basis of the most popular deepfakes. For example, the remplacement of Jack Nickolson’s face in The Shinning by Jim Carrey’s face. or synthetic media, carry for non-specialists the idea of a technological sophistication so extreme that it escapes common understanding. This technical vocabulary allows us to imagine processes developed in secret laboratories, some sort of boosted Photoshop in the service of Frankenstein doctors in the field of communication. And if it is true that there is a certain complexity in the workings of the GANs behind the deepfakes, one need only look at the literature and popular online videos to better understand the methods used to make synthetic media. Nothing magic. 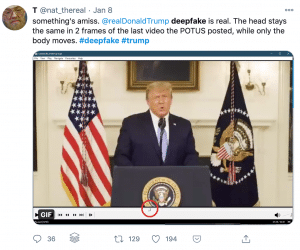 A Trump supporter tries to provide an explanation for what he perceives as evidence of manipulation.

But when in doubt and to find the flaw, it is a matter of scrutinizing, observing, dissecting the smallest inch of video, the smallest missing pixel, the smallest compression artifact visible to the naked eye. Everyone can observe and draw conclusions based on their cognitive biases and personal beliefs, but the result does not rival what can be produced by adapted detection tools.

The “threat” of the deepfakes thus precedes the deepfakes themselves in a largely exaggerated narrative tinged with technophobic anxieties and sulfurous conspiracy, while at the same time artists and audiovisual creators seize these tools to create videos that further virtualize the phenomenon through YouTube and other social networks. There is no imminent infocalypse. Nor will deepfakes reduce our democracies to ashes. On the other hand, we must remain attentive and question the subtle but certain diffusion of synthetic media on the web, on television, and in the cinema. Little by little, following the example of the digital special effects that Jurassic Parc has popularized, synthetic media will progressively modify our perception of reality and question our senses. We are only at the beginning of a deep modification of the western visual culture and we would be wrong to overestimate the deepfakes as well as to neglect their effects.

The deepfakes of "Hôtel du Temps" by Thierry Ardisson

France 3 is about to launch a new show produced by Thierry Ardisson, called "Hotel du Temps". The show will...