Soya no Sohi and his male double Yasuo Nakajima

Soya no Sohi, a pretty Japanese motorcycle fan seems to be a fantasy in the land of the rising sun. Many people have been deceived by the imposture of a 50-year-old in search of success on Twitter. Let’s take a look (briefly) at this little revelation that says a little more about our perception of synthetic media.

The story seems a little big to be true, yet the Japanese discovered the deception on television where a team of Getsuyou Kara Yofukashi (Sitting Up Late From Monday) tracked down the owner of the account of the young Soya no Sohi 1 Face editing: Japanese biker tricks internet into thinking he is a young woman, BBC, March 20, 2021 . The 50-year-old biker, answering to the name of Yasuo Nakajima 2A ‘beautiful’ female biker was actually a 50-year-old man using FaceApp.After he confessed, his followers liked him even more, Washington Post, May 11, 2021, admits without difficulty to have used the Faceapp application and other editing tools (probably Photoshop) to modify his appearance. Her goal: to gain more followers on Twitter. The result exceeded his expectations since the account now climbs to more than 20,000 followers. 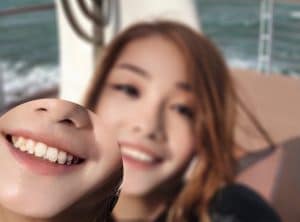 The deepfake @azusagakuyuki shows some alignment problems with Zonggu’s face at the level of teeth. Other photos show artifacts around the neck, hair, and inconsistency between different body parts (hairy male arms and young female face)

According to the BBC, the reactions of his followers have been quite positive and many have praised the cuteness of the move. Some even started following the account after the revelation, makingAzusagaKuyuki‘s account rise from 19k to 25.1k followers. The man continues to tweet, capitalizing on his 15 minutes of fame.

A “catfish” that raises some questions

Catfishing consists of adopting a false identity online in order to manipulate a victim or to make a particular gain 3“Catfish : la pêche au faux“, RTBF, 2015. This practice, which has definitely gone over to the dark side of the force, is in reality only one side of the reality of hundreds of thousands of Internet users who take refuge behind a substitute identity, a synthetic “self” with properties sometimes diametrically opposed to their own. One immediately perceives the dangers of the practice. Any unstable personality can pretend to be something he or she is not and exploit the weaknesses of gullible victims 4If you haven’t already seen it, watch the extraordinary mockumentary Catfish and the documentary Don’t F**k With Cats: Hunting an Internet Killer with a slightly more distant theme, but I felt like recommending it. Here, the public reception was surprisingly benevolent, the Japanese culture – more permissive than ours on some of these subjects 5“Le business des culottes usagées s’exporte en France“, RTBF, 2016 – certainly contributing to the normalization of this type of behavior.

Contrary to some, I will not bring this story closer to that of Raffaela Spone 6” Faits divers et deepfakes ” March 2021 whose proven use of deepfakes remains to be established. The case of Yasuo Nakajima nevertheless allows two remarks.

The accessibility of tools for manipulating and creating synthetic media allows some users to become sufficiently familiar with the technique and its concepts to detect a utilitarian function. In this case, masking an identity that is considered disabling and replacing it with another more disabling one. The level of maturity of the public has clearly increased with regard to these new platforms of creation, the entertainment leaves the place to the utilitarianism.

This is the first step for a certain number of Internet users who will not hesitate to go further if the need arises (need for realism, comfort of use of an interface, etc.). The understanding of these new tools increases the level of competence, then the level of requirement, and thus creates a demand for more powerful, more affordable, and more widely distributed tools.

The list of this type of news story is likely to grow in the coming months as traditional opinion outlets pick up on it. The apparent harmlessness of these tools, mainly intended for recreational use, will gradually acculturate the general public with synthetic media without necessarily reminding them of the elementary rules of caution. It is on this point that we must remain vigilant and try to provide answers

The deepfakes of "Hôtel du Temps" by Thierry Ardisson

France 3 is about to launch a new show produced by Thierry Ardisson, called "Hotel du Temps". The show will...

The state of deepfakes in 2020

If 2020 has left its mark on people's minds, it will not be because of the dramatic arrival of deepfakes...